A question often asked is what sort of plants should I have around my house if I live in a fire-prone area.

Whilst recent trends have been to save water and plant waterwise plants, these can often cause problems as they may also be quite flammable. Typically plants with volatile oils in the leaves, such as lavenders or eucalypts will burn intensely and quickly and need to be kept well away from the house. At least 20 m is a minimum spacing.

Artemisia or Wormwood is a drought-tolerant shrub that grows up to 2m or more high if left unpruned. It has volatile oils in its leaves and accumulates dead leaves along the older stems. A useful, tough garden plant except that it catches alight very easily. Best kept well-watered and pruned hard each year or replaced with something less flammable.

If you have adequate water and areas which are protected from the hot afternoon sun in summer, then hydrangeas could be good candidates. 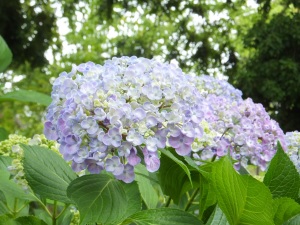 Hydrangeas do require watering over summer otherwise they will wilt and start to dry out thus becoming more flammable. If the plant is kept well watered, leaves remain moist and less likely to burn unless exposed to embers or flames until dried out.

A useful tip is to try the barbecue test where a gas barbecue is heated up and specimen plants of various sorts are placed on the griller part. Some plants will burst into flames immediately, others will burn after several minutes once they have dried out, and others, such as the hydrangea will take some time until they are all dried out and then will smoulder, rather than burst into flame. These tests are best treated as a guide only because any plant will burn if exposed to flames for a long period, but some plants will burn more readily than others and these are best kept away from the house.

Fine leaved plants with waxy leaves and oils in their leaves are best placed well away from the house. Plants such as coprosma and most deciduous trees which are of low flammability are potential candidates for gardens likely to experience bushfires and in order to provide shade can be planted closer to the house than 20 m but not so close that they overhang the roof.

Testing plants on a gas barbecue at the Fire Station in Balingup.

It was after 6pm and we placed the barbecue several metres out from the veranda on an open gravel-covered area. (Just to make sure we did not start a bushfire!). A useful exercise with most plants burning more than we would have predicted.

To be a safe as possible it is worth spacing low flammability plants at least 5m to 10 m out from the house and keeping them well maintained and watered. If they dry out or become very big they are just fuel for a fire by a different name.