There are many articles around at present along the lines of  “Plant native gardens to save water”. In bushfire prone areas this is not the best thing to do.

On the surface, planting natives on a property or leaving existing ones there, may appear to be a good idea, but in the quest for being waterwise, in this part of the South West, the result may be a hazardous environment susceptible to bushfire attack.  Why is this the case?  Let me explain.

This garden in Margaret River has retained much of the native bush with both eucalypts and many shrubs. Note the litter on the ground made up of fallen eucalypt leaves and twigs. Any ember falling on the litter is likely to ignite the dry leaves and spread fire to the shrubs and trees and then to the house.

The plants native to the South West have evolved to cope with a mediterranean climate which has the characteristics of hot, dry summers and cool, wet winters.  These plants share with other plants of mediterranean regions certain features that help them survive the prolonged periods of summer drought, such as waxy leaves with volatile oils to prevent water loss and small leaves with a low surface area, again to reduce evaporation through the leaves.  Typically the countries with this climate, apart from ourselves, are those bordering the Mediterranean Sea, the Cape Province of South Africa, southern California and parts of Chile.  Thus many of the plants of our area have similarities to typical mediterranean climate plants, such as lavender, rosemary, cistus (rock rose), diosma and radiata pine.  All these examples are inflammable as are many of our plants here, including eucalypts, melaleucas and callistemons.

Wildfires, either caused through lightning strikes, human activity (either accidental or deliberate), are endemic in all these areas.  Native plants and animals have evolved within an ecosystem of frequent fire and are thus adapted to this fire-prone environment.  Indeed many plants rely on fire to recycle nutrients, to remove dead vegetation (that would otherwise hinder growth), and to aid in seed dispersal.

Thus we can expect frequent fires through our forests and heathlands of the South West.  In itself this is no bad thing; the problem arises at the rural urban interface (RUI) when forest and house are in close proximity.  Having a space of a couple of hundred metres between bushland and a house with its garden is far safer than having a property in a tiny bush clearing with eucalypts towering over the house.  However, if that garden is a replica of a piece of bushland with many of its plants being inflammable then the inhabitants are at increased risk through ember attack. 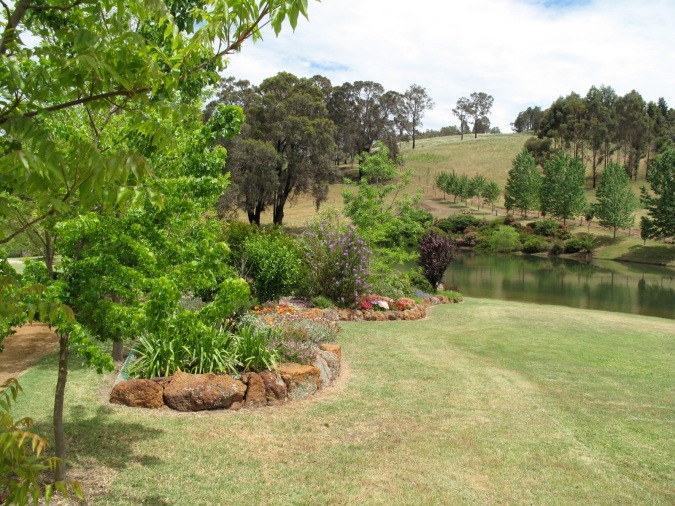 A garden in Bridgetown with deciduous trees, wide paths and sweeps of lawn make this garden at low risk of bushfire attack.

There are plants, both native and exotic, that are quite waterwise and, importantly, are of low flammability.  Take the grapevine, the mulberry, the carob and the fig – all come from a mediterranean climate and yet are slow to burn.  Thus selection of plants to ensure they are not going to support a fire and their placement in the garden with gaps between them and the house is important to minimize the risk of fire.  Many deciduous trees are good candidates for gardens in fire-prone areas.

In the aftermath of the Victorian bushfires of February 2009, the Country Fire Authority has produced a helpful online, interactive Plant Selection Key.  http://www.cfa.vic.gov.au/plan-prepare/landscaping/

The debate is not about natives versus exotics, it is rather about choosing appropriate plants and landscape styles that minimize the bushfire risk .