It was no accident that the school survived

The Report into the Special Inquiry into the January 2016 Waroona Fire made mention several times that work had been done in the months before the Fire to reduce the fuel loads in and around the school buildings.

Whilst the Report provided some information I wanted to know more of the details of the work done on the school and its grounds so contacted Phil Penny who was the Chief Fire Control Officer for the Harvey Shire. Mr Penny was also on the School P and C. 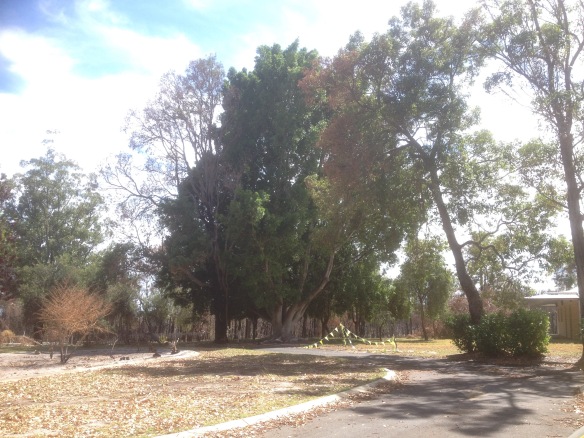 In the front area of the school grounds two months after the fire. Note that large fig (possibly a Moreton Bay) is relatively unscathed whereas the trees in the background are burnt. To the west of the school (toward the left of the image), several houses in School Road were destroyed, yet apart from one or two small sheds in the school grounds the buildings were intact.

Mr Penny sent me the details of the works to be done on the school. It was a straightforward document with photos of the areas that needed to have fuel reduced with descriptions of the actions to be taken. Here is the Bushfire Risk Inspection for Yarloop PS.

It’s worth a read as an example of the types of work that needs to be done, eg removing truckloads of debris made up of litter, fallen branches, dry grass, etc from certain areas.

Here is a quote from Mr Penny about this work to make the school safer:

“This is the original document I did up for Yarloop Primary School. Simple yet proved to be very effective. Work was carried out over about two months prior to the Bush Fire season and as we know the school survived. It just goes to show that the simplest of actions can be very effective in reducing risk and enhancing survival.Let me know what you think.”

I asked Phil the burning question (sorry) of “how much did it cost?”

Here is his reply:

“In the case of the school the cost ended up around $6000 which seems expensive but considering that they carted away a huge amount of fuel and mulch like material and tree loppers were utilised to trim trees it was an inexpensive investment in longevity for the school. Also all of this work was carried out by contractors to the school and the cost was afforded by Building Management and Works (BMW ) who look after maintenance for Government Infrastructure.
The ongoing maintenance is looked after by the School Gardner as part of normal duties ( except for any tree lopping ) and therefore ongoing costs are minimised.
For the average home owner most of this could be done by themselves and if need be burnt onsite at right time of year and therefore cost is minimal. Most people think that they have clear everyting to make it safe and I have proven this is not the case. They just need some direction which I provide.”

So you there you have it, for a small sum of $6000, the school was made to be at much lower risk from bushfire attack.

It is worth noting, too, that the school was undefended as the fire swept through. Thus it had been made to be self-defensible. Indeed it came through so well that it became the on-site location for the management of the clean-up effort, the Recovery process.

Would the outcome have been any different if, say, similar plans had been drawn up for the community centre, the Railway Workshops, the fire station and groups of houses?

If something of the order of  $100,000 had been spent on Yarloop in the months before the fire, the result may have been very different. Two men may not have lost their lives. 160 houses may not have been destroyed. At least $60 million dollars has been spent in the clean up.

What price safety? Instead of so much emphasis on response and recovery a program that assessed the small towns of the South West and spent a $100,000 on, say 10 towns each year, could bring huge savings.

It’s not just the money, of course. Democratic governments in civilised countries have a duty to keep their people safe. Australian citizens should not have to go through the terror of a fire like the Waroona Fire nor come back to the horror of their house and sheds burnt to the ground, their pets killed, their farm animals injured and dying.

We can do better. The bushfire risk reduction process carried out on the Yarloop Primary School is a shining example of the benefits and the sheer cost-effectiveness of these steps.

Let’s look at implementing these pre-emptive actions throughout the Perth Hills and the South West.

Many in Australia and overseas would be familiar with the bushfire that occurred in early January this year that burnt through thousands of hectares in the Waroona and Harvey Shires and caused a significant proportion of Yarloop to be destroyed.

Two people died in the Yarloop fire and over 160 houses were destroyed. The Government instigated a Special Inquiry into the January 2016 Waroona Fire. The Inquiry was undertaken by Mr Euan Ferguson AFSM. The Report titled “Reframing Rural Fire Management” was tabled in Parliament on Thursday 23 June 2016.

The Report is available on line at:
https://publicsector.wa.gov.au/waroona-bushfire-special-inquiry

This same web page provides links to the submissions made to the Inquiry. One of these submissions written by a member of the public, No 39, described why the Yarloop Primary School came out relatively unscathed despite being close to areas of the town that burnt intensely. There is an extract from this submission on Page 101 of the Report, which reads:

The Primary School remained standing throughout the fire. Although unattended as the fire passed, the school survived this was due to the fire Protection Plan developed by local fire experts – this plan included fuel reduction and separation of buildings from vegetation.37

The full submission is here and is from an experienced forester which sums up much of what needs to happen in advance of the heat of summer.

Submission of member of public No 39 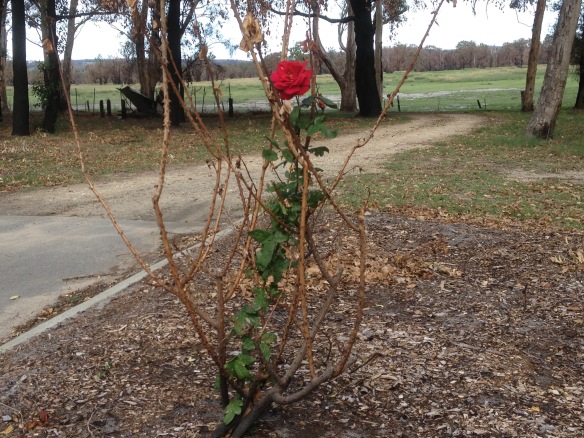 In the grounds of the Yarloop Primary School a solitary flowering stem emerges from the base of a rose bush, scorched but still alive.

If only we could develop robust systems as described in this submission to reduce the bushfire risk largely due to the build up of flammable vegetation across forests, grasslands and in towns, we could have a less stressful fire season. And no mass destruction of homes and farms.